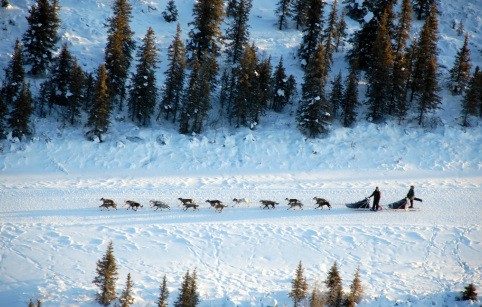 Every year since 2010 the Denali Doubles Dog Race brings the best mushing teams from across Alaska to run in an intensely competitive race across a 226-mile course. Experiencing this race for the first time will entirely change your perception of dog sledding, as you witness a race of epic proportions. Many who have followed this race have felt awe when watching the map online sliding across the state. Our Alaska car rentals are a great way to experience Alaska, but there’s nothing quite like dog sledding across the state to find out what it would have appeared as hundreds of years ago.

Unfortunately, you won’t be able to experience anything quite like what the racing mushers experience. You can always take a dog sledding tour to get a small taste. Until then, Avis’s Alaska car rentals will certainly do the trick to reveal to you Alaska’s beauty. In the meantime, live vicariously through the Denali Doubles mushers.

When is the race?

The race began on February 4, 2016 at 4 p.m. It begins and ends in Cantwell. As you can see from this, the Denali Doubles Race is no walk in the park. For the closing ceremonies you’ll want to bring your Alaska car rentals to Cantwell in order to witness the champion take his prize.

Who are the mushers?

The Denali Doubles race is a team competition with sleds run by a team of two mushers. These pairs lead a team of 12 to 20 dogs in the 226-mile race. Teams range from professional pairs who have discovered their compatibility on a dog sledding course to husband and wife teams whose companionship has made them an ideal racing duo.

Many of these racers are champions from past races, and who are certainly no strangers to the intensely exhausting course.

Mushers must pay a $500 entry fee in order to register and compete. There is a 20-team limit in the Denali Doubles Race to prevent overcrowding. This year, only 17 teams competed in the event however, as a number of them withdrew.

Innovation is part of the appeal of the Denali Doubles. With a variety of interpretations on “sled” in the past, including two sleds pulling a trailer and caboose, three-runner sleds, sleds with a skier, and every other variant you can imagine, you’re bound to see something to boggle your mind.

As mentioned, the course begins in Cantwell. It stretches to Tangle Lakes Campground at Swede Lake Trail, before returning back to Cantwell. There are rest stops along the way, where both viewers and mushers can rest in warm lodgings to regain their energy before continuing on their journey.

The two lodgings on the course are Maclaren River Lodge at mile 42, Denali Highway, and the Alpine Creek Lodge at Mile 68, Denali Highway. These two checkpoints are also points where mushers may drop off their dogs on their outbound journey to rest, before picking them up again inbound on the way back to Cantwell.

The prize for this exhausting journey is no slight matter. Now dispersed among the top 5 mushing teams rather than only the top champion, the prize has not necessarily decreased for the champion who takes home a hefty $5000.

The next race to check out is the Iditarod, which begins a month after the Denali Doubles on March 5. A single musher race, each musher gets 16 dogs for their journey to Nome.

Take a Nature Tour of Alaska

Bush Cabins are Disappearing From Alaska
Scroll to top