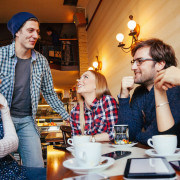 With its original shop in Government Hill making waves in the family-friendly atmosphere of the town, owner Jill Johnston decided to try something new. In May, Johnston opened up a pop-up shop at the Westchester Lagoon in the old restaurant shack that used to be home to Covey Café until 2010. In fact, this is the first shop to open up in the space since the closing of the Covenant House operation, Covey Café. Now, Covenant House maintains a strong hold on the workings of the shack.

What is Covenant House?

Covenant House is a home for underprivileged and homeless youth. Owners and employees of the House help residents escape the cycle of poverty by encouraging opportunity. One way that this is accomplished is through employment programs.

The Covenant House seeks out local businesses that are willing to take on youth in internships to teach them the workings of business, the service industry, and having a work routine in general. Youth without a resume or the communication and interview skills necessary in finding a job are given a second chance to start their lives on the track of independence and success. The Covenant House has a grant that pays for youth for a certain number of weeks during an internship with the business, after which time the business hopefully will hire the youth onto their staff as permanent paid employees.

What is Busy Beans Coffee Shop?

The Busy Beans Café began with its own agenda of changing the social landscape in Anchorage. Jill Johnston, a mother of two, began to notice a gap in local restaurant options when her 4-month old grew restless in coffee shops. These adult-friendly atmospheres weren’t exactly prime location for a mother looking to get out of the house with a young child.

Johnston yearned for a shop where her child could be safe and free to wander without intruding on other patrons’ relaxation time. The concept of Busy Beans was born.

Busy Beans Café is a place where parents can bring their children to cozy up on couches or just to play while the adults have their time. It’s 100% family friendly, and is a great stop for parents during the summer months when school is out. If you’re traveling with kids, take your Alaska car rentals down to Busy Beans for a fun time for the whole family.

So what does Busy Beans Café have to do with Covenant House? More than you might think.

Currently there are 3 youth from Covenant House working with Busy Beans, aged 20, 20, and 18. Whether or not these youth will choose to keep on with Covenant House is up in the air – they all have gained their own goals for career beginnings. One is looking toward the University of Alaska Anchorage for civil engineering, another to construction, and the final youth is considering moving towns for a fresh start. Johnston has said that no matter what they decide, they will certainly have a spot at Busy Beans in September.

If you want to stop by the Busy Beans Café by Westchester Lagoon, the shop opens from around noon until nightfall every day. Nightfall can be anywhere from 5:30 to 8 pm, so make sure to stop by early if you want to guarantee a nibble of their sweets.

This shop is a great place to park your Alaska car rentals and explore. There’s some beautiful scenery and the area is known for bikes, hikes, and kayak adventures.

Begin on your exploration of Anchorage today with Alaska car rentals from Avis Alaska. 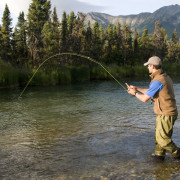 Fishing season is in full blast in Alaska. Whether you’re a resident or just visiting, it’s important to know what information you need before you take your Alaska car rentals off on fishing trips. Alaska is a great place for fishing, with a wide variety of species to be found. Salmon is the major fish species that you’ll find in Alaska, but other fish such as halibut can also be discovered in abundance.

One of the most important things to remember is to be respectful, especially if you are a visitor of the state. Many residents rely on fish as a major source of food, particularly throughout the winter months.

Make sure you have the right licenses and permits for fishing, no matter what area or city you’re in. Choose lakes and rivers that are acceptable for fishing, as approved by the local government. Don’t litter, or drop pollutants into the water. Take your litter when you leave and deposit it into the proper receptacles. When you’re driving your Alaska car rentals to your fishing spot, stick to designated roads to avoid ruining local vegetation.

Fishermen in Alaska are often found complaining about the ineffective bait that bring in quite the quantity of salmon that most would like. In the past, salmon populations just weren’t at high enough levels to allow for extensive fishing.

Fortunately, this year marks the first in 4 years in which fishermen may use more effective bait. In fact, fishermen on the Kenai River have remarked that no bait at all is necessary much of the time. The populations have increased to such a level that simply throwing a line into the river may work well enough to provide a decent catch. With that in mind, many guides are actually arguing against the use of bait. Their argument is that because so many people are having luck with their catch without bait, there’s no need to risk depleting fishery resources with excessive bait fishery.

There are myriad options you can use for fishing in Alaska. Read on to find out about each method before you pack up your Alaska car rentals for a fishing trip.

Dip netting is a great option for catching large quantities of fish with which to stock up the freezer. The problem with dip netting is that it is quite expensive to buy the necessary gear. However, once you do have the proper equipment, sockeye salmon will only cost $1-$2 per pound to catch. Of course, you may not catch anything at all with dip netting.

However, if you do catch fish you’ll have gained a high yield without as much work. Don’t be fooled, though. Dip netting does take up energy and time to properly execute. Like anything else, practice makes perfect.

Rod and reel fishing is a much easier method that anyone can pick up. It may not be the most efficient, but it allows you to venture across a variety of rivers and lakes to catch fish. You’ll be offered up a more traditional experience that is akin to what people have been doing for centuries. This method allows you to access a variety of species compared to dip netting, as it is more mobile.

Unfortunately, rod and reel takes up more time than other methods. However, this method also allows fishermen to catch and keep fewer fish. Furthermore, gear for this is still expensive, like dip netting.

Finally, subsistence fishing is mainly common among residents of Alaska. It embraces traditional methods that allow fishermen to feed their families and replenish their food supply. Subsistence fishing relies on fish wheels and gillnets to gain high quantities of fish. The government allows higher limits on the number of fish subsistence fishers can catch and keep.

Those who subsistence fish cannot take part in personal use fishery, however. Also, this method relies on fish runs, which can be tough to find or reach in your Alaska car rentals.

Get started on your perfect fishing trip in with Avis Alaska car rentals this year. 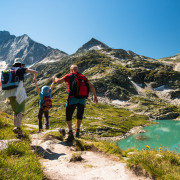 Hiking and camping are specialized interests. Unless a person has the most enjoyable introduction to either one of these pastimes, it’s easy to dismiss either one as difficult, too energy-intensive, or boring. If you want to get your family into hiking and camping in Alaska, it isn’t as difficult as you may think. All it takes is the right approach and the right attitude. You’ll need to make sure you pack your Alaska car rentals with the proper equipment, nutritious snacks, and appropriate activities to get teens and children into hiking. But with the right planning, any family can become hiking and camping lovers.

The fact is that most of the time, kids and teenagers can think of things they’d rather do other than hiking. The most important thing you can do is to show them that hiking doesn’t have to be exhausting. There’s light work out, then there’s strenuous and arduous, tear-inducing marathon hikes. Pick the former.

Choose hiking paths that are reasonable, and have something interesting along the way. Gorgeous views, intriguing historical sites, and quirky landmarks are all things you should be looking out for when you choose your hiking path. Still yet, pick a hike that won’t take them over intense obstacles and terrain over a five-hour day. Choose hikes that are suited to your kids’ skill levels, but still may offer them a sense of accomplishment at the end of the day when you’re all filing back into your Alaska car rentals.

Two examples of fairly easy hikes are the Echo Bend in Eagle River and around the Eklutna Lake.

While you may know that the hike is a reasonable one, that doesn’t mean your kids have to. If you push their expectations into thinking the hike is more difficult than it is, they’ll be pleasantly surprised and feel a larger sense of accomplishment if they can take on the hike without problems. Small reminders like asking about bug spray, proper hiking shoes, and asking them to stretch before the hike are all subtle ways of hinting toward a tough day.

Don’t be afraid to offer rewards

Most parents know that rewards are huge motivators for kids. Offering things like their favorite snacks while on the hike, or taking them out to their favorite restaurant for an after hike dinner can be great options. Also promising to bring them to the site they really want to see or event they want to go to can help them get excited about completing the hike successfully. Along the way, they may even realize they have fallen in love with hiking and it won’t take a bribe next time.

For families with older kids, wilderness treks may not be such a bad idea. These can take as little as 3 days and go up to 9 days, and will take you across uninhabited areas of Alaska that are thriving with wildlife. These camping trips are a great way to learn about your limitations, to bond, and to grow an appreciation and respect of nature. However, they’re not for the inexperienced or faint of heart. And they certainly aren’t for kids younger than teenagers.

Camping is great fun, but when with the kids, make sure to choose a designated campsite. A site like the Denali National Park is ideal for seeing Alaska in all of its wonder, but without straying off the commonly traveled road. The Denali National Park also offers a beautiful drive in your Alaska car rentals to get a full glimpse of the mountain views.